So obviously I have a thing for lichens.  It’s understandable, then, why it was a National Geographic story about lichens that broke me out of my months-long blogging slumber. (Yet another h/t to MtMB.)

At first, I thought the story would be interesting because it was about how genome sequencing of an organism can lead scientists to differentiate or re-classify organisms along species lines, leading into the meta-question of “What is a species anyway, and what are the protocols for making that decision?” In this case, one species of lichen, Cora, becomes 126 different species, by genome sequence standards.  But there was much more to grab my interest, above all the affect of interest-grabbing as a dimension of the scientific life.

The NatGeo writer Ed Yong quotes the Field Museum’s Robert Lücking, the lead author on the PNAS article, early on in his blog post:

It’s “the most spectacular case of unrecognized species richness” in any group of large organisms, says Lücking.

Except that Lücking didn’t say that–he wrote it.  The kind of thing that a scientist would indeed usually only say to a science writer, packing some of the afffective charge that is an important driver of science but usually gets edited out of the scientific publication, here managed to push a bit on those genre conventions.  And as the PNAS paper continues:

Our result is especially striking considering that these are conspicuous macrolichens well known to the scientific community, having been used in numerous environmental, ecophysiological, chemical, and ultrastructural studies.

This language suggesting the physical force of the affective charge “striking” the scientist becomes a bit more explicit in the oral exchange with the science writer: ““We were absolutely stunned by the result,” [Lücking] says.”

“Stunning” is not part of the permissible vocabulary for the scientific paper, but “striking” is a close approximation.  That word appears again in the PNAS paper, accompanied by “dramatic”:

Two genera, Cora and Corella, are foliose macrolichens, with a total of 16 species, corresponding to what was considered a single species, Dictyonema glabratum. This name is well known in the scientific community and even among nonspecialists and is included in the Listing of Interesting Plants of the World (17). The 16-fold increase in the number of species now recognized is a striking figure that even surpasses recent findings reported from the large macrolichens Lobariella and Sticta in the Ascomycota. The dramatic change in the taxonomic concept of these basidiolichens has important implications for recognizing their role in ecosystem function and as model organisms. Species of Cora abound in tropical montane regions and, with their cyanobacterial photobionts capable of fixing atmospheric nitrogen, serve as biological fertilizers. Cora is also one of the best studied lichens in terms of ecomorphology, ecophysiology, and biochemistry…

Although the number of 126 species in Cora and Corella
now recognized is staggering, it may still be far from the actual species richness in this group…

Maybe I’m struck more than I should be by these few mentions of staggerings, strikes, and drama.  But in a paper full of the usual measured and modest rhetoric — “this assessment is consistent with the observation…” and “This result does not appear to be a sampling artifact…” and “Our findings underline the importance of accurately documenting species richness…” and “as has been suggested for certain fungal lineages…” and “a figure of 452 predicted species does not seem out of the realm of possibility…” and “our data suggest that macrolichens might surpass even the fastest-evolving vascular plants in diversification rates…” — I find them to be…rather noteworthy.

In addition to these glimpses of affect, a number of other features of this study were striking to me.  The PNAS paper contains the following photo grid of lichens, reproduced at the head of the NatGeo piece by Yong: 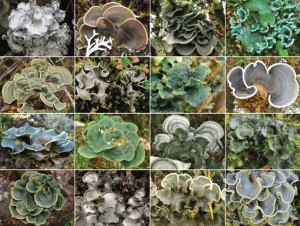 Beautiful, yes?  And it makes you wonder how anyone could have ever collapsed that obvious diversity into a single species, how those sixteen Coras–let alone 126 Coras–could have ever been misapprehended as one.  Here the authors go into modest-mode, but again a hint of the surprise and drama that so suffuses science still manages to peek through:

Notably, most of these are not cryptic species recognizable
from molecular data only, but morphologically distinct taxa supported by phenotype features, substrate ecology, habitat preferences, and geographical distribution. Many are so distinctive that it is surprising that they have not been recognized before (Fig. 2).

Yeah, no kidding –how could a lichenologist miss that surprising diversity?  A surprisingly obvious diversity, and obvious for a surprisingly diverse set of reasons: they came from different places on the planet, they lived on soil or rocks or trees, and they had different “phenotype features” — i.e., “look at them!!!”  How do the authors explain this glaring (in hindsight) oversight?

The likely explanation is that important features such as color, texture, and substrate are lost in dried herbarium specimens, which makes these lichens a prime example of taxa to be studied in the field.

So working only from established collections cut scientists off from real difference. There was little hint of the actual diversity in the dried specimens.

And there is probably still more species diversity to be found in Cora.  The authors sequenced 376 Corasamples to come up with those 126 different species.  Where did those samples come from? Grid the Caribbean, Central, and South America into 209 squares, like so: 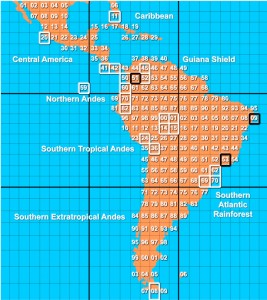 Those 376 samples were gathered in only 20 of those 209 squares, about 9% of the grid.  The authors considered only 2 squares “well sampled” (one in the Andes of Colombia, and one in the Brazilian rainforest), and those samples account for nearly half (51) of the newly identified species.  Using a variety of estimating techniques, the authors project that there are likely to be 452 species of Cora, “a further remarkable increase from the 126 species recognized in our current phylogeny and an unthinkably dramatic increase from a single species, D. glabratum, accepted until a decade ago.”  That’s not just drama–it’s unthinkable drama.

The other important methodological innovation to this study, complementing the DNA sequencing, was the photographing of samples as they were gathered in the field. Yong for NatGeo:

The problem is that you can only see this glorious diversity by studying the lichens in the wild—and most scientists had worked with specimens that were dried and stored in herbariums. Take them out of their natural setting, and important ecological cues vanish. Dry them out, and their stunning palette collapses into a few boring hues. Lücking’s team escaped this trap by snapping a high-resolution photo of every lichen that they took a sample from. “We were absolutely stunned by the result,” he says.

That’s not to underestimate the importance of the DNA sequencing itself, which carries a habit-breaking force:

Lücking also suspects that many lichenologists were also hamstrung by a weird circular logic. Lichens can look very different depending on where and how they grow, so a single species can take on many guises. That made it easier to believe that very different specimens were actually the same lichen, or that very big specimens were simply older versions of smaller ones. Only DNA could shatter that unity…

Yong gets a nice quote from another lichenologist, who also seems to have had some kind of  experienced of force when viewing the lichen diversity and beauty:

“This work beautifully illustrates how little we know about the numbers of fungi on Earth,” says Anne Pringle from Harvard University, who studies lichens. “I’m struck by the beauty of the lichens illustrated in the paper, and wonder if local peoples knew these species already, even though they aren’t described within the formal scientific literature.”

And Yong gets Lücking to expand a bit on the sigificance of lichens and this research into them, in language that does not make it into the PNAS article:

Most of these species live in paramos—small habitats in the Andes Mountains, above the forests but below the snow. In these cool worlds, the lichens control the amount of water and nutrients in the soil, setting stable foundations for food webs that include Andean condors, spectacled bears, and a unique range of fast-evolving plants.

“These ecosystems are highly threatened and have disappeared to a large extent,” says Lücking. “Each paramo that disappears takes unique species down with it. Previously, it was believed that all paramos were similar, so their genetic diversity could be conserved by conserving just a few fragments. But now we know that this is not the case.”

There was one part of this drama that Yong did not mention, but I think deserves to be part of the story.  All scientific research needs funding.  A basic point, but one I think especially important to highlight now.  And there are not many entities capable of or interested in funding lichenology.  So in addition to the long list of people who provided materials or helped in the fiedlwork, the Acknowledgments in the PNAS paper make visible another usually invisible component essential to scientific research: this stunning, striking, spectacular, suprising science was funded by two National Science Foundation grants, one to George Mason University and one to the Field Museum.  Although the vitality of NSF resources for scientific research likes this may not be as endangered as its support for the social sciences, I’d hate to see this kind of research go unfunded and thus undone because of dimwit rightwing Republicans.